Charles Hovenden, Portfolio Manager at Square Mile, discusses the IA Targeted Absolute Return sector and whether it can deliver for investors.

A return of cash plus 3% is hardly worth bothering with, right? After all, the FTSE All Share Index (including gross dividends) has returned more than 11% p.a. since the end of the financial crisis in 2009. And that is despite the tortuous Brexit shenanigans and the stock market’s painful 10% decline in 2018.

The difference, of course, is that stock markets have enjoyed an unprecedented, smooth ascent over the last ten years, fuelled by QE and negligible interest rates which have left investors with nowhere else to go in search of any kind of return. A virtuous circle based on weight of money has been created. In contrast, the previous ten-year period included two bear markets with their epicentres in 2002 and 2008. The power of compounding in long-term investment success therefore cannot be understated, and minimising losses when share prices are tumbling is every bit as important as making money when markets are going up. Perhaps this time it really is different and central banks can and will continue to manipulate markets to protect investors from the forces of gravity. But hundreds of years of financial history suggest otherwise. The virtuous circle could easily morph into a vicious one.

Retail absolute return funds and the IA Targeted Absolute Return sector were really born in the ashes of the financial crisis. Unsurprisingly, the lure of capital protection and steady, absolute returns met a receptive audience following the wake of the devastation of investment portfolios in 2008. At the end of 2008, the IA Targeted Absolute Return sector comprised only 30 funds with an aggregate size of £2.6bn. By the end of October 2019, the sector had swelled to 120 funds with an aggregate value of more than £84bn. This growth is all the more remarkable considering that it has coincided with liquidity-fuelled and soaring equity markets.

The five largest funds in the sector as at 31st October 2019, together with Square Mile’s sub-strategy classifications and their launch dates, are shown in the table below. 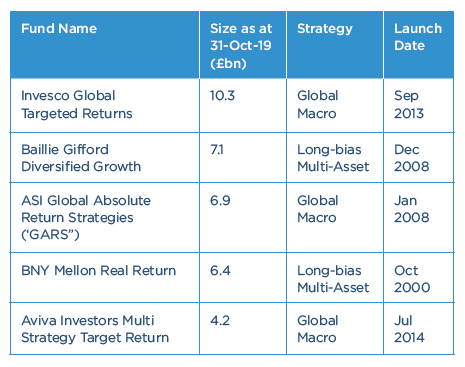 While assets under management of £84bn still make Targeted Absolute Return the fifth-biggest IA sector, this is a precipitous decline from peak assets of just under £114bn in July 2018. The exodus of money clearly shows that investor enthusiasm for the sector has been replaced with widespread disillusionment and it is not hard to see why.

First, the total-return FTSE All Share Index is again up by more than 10% so far in 2019, whilst many overseas markets are up by much more. Given the uncertain outlooks for economies and corporate profits, we could argue that investors should be taking profits and increasing their allocations to absolute return funds, but it is human nature to do the opposite. Fear Of Missing Out (“FOMO”) is a powerful influence.

“While assets under management of £84bn still make Targeted Absolute Return the fifth-biggest IA sector, this is a precipitous decline from peak assets of just under £114bn in July 2018. The exodus of money clearly shows that investor enthusiasm for the sector has been replaced with widespread disillusionment.”

Following some poor performance, outflows from just these two funds account for about 60% of the overall decline in assets under management in the IA Targeted Absolute Return sector from its peak. However, the cause of investor disillusionment with the sector is more general and widespread.

As noted above, 2018 was the first calendar year in which stock markets indices declined since 2011. The quantum of the decline, however, was hardly calamitous. The FTSE All Share Index (including dividends) fell by 9.5% and global stock markets indices were down by a little less in local currency terms. Against this backdrop, it was surely not unreasonable for investors in absolute return funds to expect their capital to be preserved or close to it. However, just 15 of the 109 constituent funds in which were in the IA Targeted Absolute Return sector made money in 2018. The median fund lost 3.2% and the mean return was down by 2.9%. As depicted in the histogram below, the skew in the distribution of fund returns in 2018 was horrible. No wonder investors are losing faith in the sector. 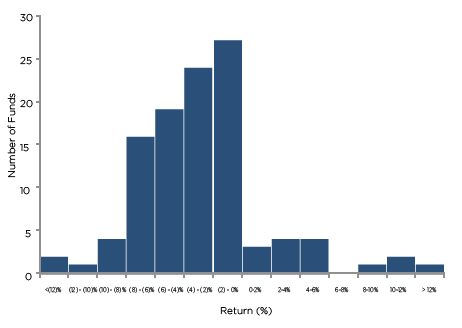 Without passing judgement and for the record only, the three best- and worst-performing funds in the IA Targeted Absolute Return sector in 2018 were: 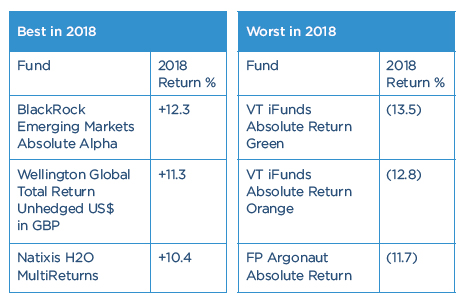 The return of the Wellington Fund above is boosted by the US dollar’s 5.9% appreciation against the pound in 2018. If this favourable factor is excluded, then the third-best performing fund in 2018 was Thesis TM Sanditon European Select (+9.5%).

In terms of peak-to-trough performance of the FTSE All Share Index, the drawdown (15.0%) in the UK stock market in the fourth quarter of 2018 was only the fourth worst since the end of the financial crisis. The biggest decline (18.7%) occurred between May 2015 and February 2016 and again the sector delivered disappointing results. Indeed, in its “Asset Management Market Study – Interim Report”, published in November 2016, the FCA rightly heaped criticism on the absolute return fund sector and commented that investors faced a ‘high likelihood of negative performance’.

Just a handful of the funds in the IA Targeted Absolute Return sector existed at the beginning of the financial crisis in 2007 and most of the funds in the sector are therefore still to be tested in a full-blown bear market. However, the results in both 2015/16 and 2018 do not bode well.

Stock markets go up on escalators but go down in elevators. Coined in the US, it’s a favourite phrase of mine and it’s true. In just 16 months between 31st October 2007 and 3rd March 2009, the total return of the FTSE All Share index (including gross dividends) dropped by 45.6%, erasing all of the gains made since October 2003. It is a simple fact of compounding that if you lose 45.6% you then need to make 83.6% just to get back to where you started. It was not until July 2012, and with a lot of help from central banks, that the October 2007 peak was finally left behind.

We suspect that funds in the sector which either meet their return or their capital preservation objectives in the next proper bear market will therefore be in a tiny minority. The evidence that the majority of funds in the sector have inherent directional equity and/or credit beta is irrefutable. For these funds the absolute return moniker is only really appropriate if prices continue to rise or are at least stable.

However, it would be wrong to dismiss the whole sector. There are a few funds, particularly in the long/short equity sub-category, which have very low directional market exposure, and have consistently generated mid single-digit and lowly correlated returns and which are most likely to protect capital when it really matters. This, for us, is the holy grail.

With bonds so expensive they are unlikely to provide the protection they have in the past, an allocation to a handful of absolute return funds is a vital component of any diversified portfolio. However, with so much dross in the sector the funds in that cluster need to be chosen with the utmost care.