Investors hoping for another increase in dividends in 2020 are likely to be disappointed but Newton Income fund manager Emma Mogford believes there is still room for optimism.

Investors in UK equity income funds have benefitted from a healthy level of income over the past decade, despite overall market volatility. From 2010 to the end of 2019, for example, the average IA UK income fund outperformed the FTSE All-Share on a total return basis.2 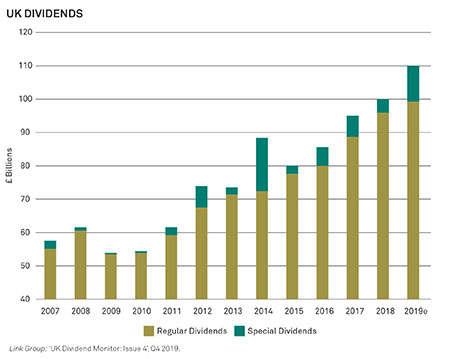 However, in light of recent market moves, the normal dividend buffer equity income funds feature will be thin. “Given the current backdrop, I’m expecting dividend distributions to decline,” says Mogford. “The spread of Covid-19 coronavirus and the economic dislocations it’s created will have a profound effect on companies’ attitudes towards returning capital to shareholders this year.”

Amid the unprecedented events of recent weeks, Mogford believes it is helpful to look back at the last time dividends were cut.

In 2009 the distribution on FTSE All share companies was cut from £61bn to £54bn in 2008, a 13% fall3. The majority of the dividend cuts came from the financial sector back then with memorable cuts to zero by RBS, Lloyds and HBOS but also sizeable cuts by Barclays, Aviva and HSBC.  Those companies with highly levered balance sheets also saw sizeable cuts – BT cut by 59%, for instance, and Marks and Spencer by 33%.4 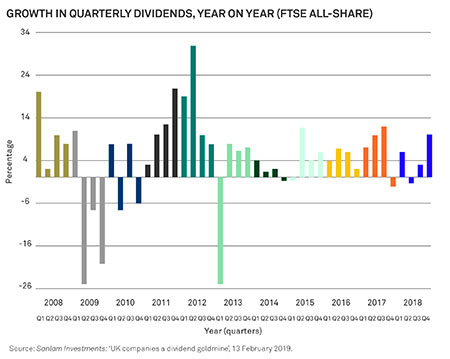 “While we don’t expect history to repeat itself we know it often ‘rhymes’ and there are some key similarities between the outlook today and what happened in 2008,”  says Mogford.

A study by Societe General looking at dividends cuts of greater than 10% in 2009 found the majority (75%) came from companies with weak balance sheets, as defined by a Merton score.5 Says Mogford: “We expect that this again will be a major indicator of company’s ability to pay dividends through the current crisis. Interestingly, some of the more cyclical sectors like mining enter this downturn with significantly stronger balance sheets than in 2008 which could help them weather a temporary decline in revenues.” 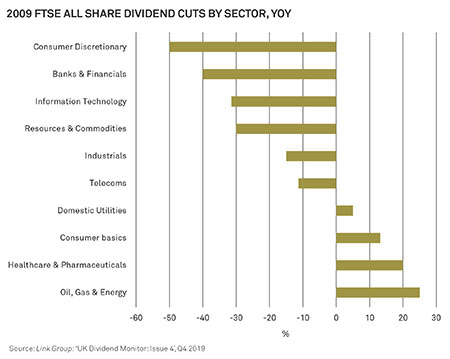 While the coronavirus shutdown will impact all sectors, those experiencing the most immediate impact are travel, leisure and retail – and this has already resulted in a number of dividend cuts and postponements.

Mogford points out Intercontinental hotels, for example, cancelled its April dividend and said it would defer consideration of further dividends until visibility improved, M&S cancelled its May final dividend while Next has cautiously replaced its final dividend due in July with a second interim payment. She adds: “Inditex, owner of the Zara brand, which is listed in Spain but an interesting example for UK retailers, has decided to postpone its April dividend to a decision in July.”

These dividend cuts are part of a wider picture, believes Mogford – but one which lacks near-term visibility over the future of retail: “We believe the dividend cut is also evidence of a change in corporate attitudes in the sector: that it’s not reasonable for companies to continue paying shareholders even as they’re letting staff go.”

As hard hit as retail, travel and leisure are right now, Mogford says arguably the biggest risk to UK income pay-outs today is in the energy sector.  She believes an oil price that remains in the US$20 region for any length of time could profoundly affect companies in this space. “At current levels, the dividend payments of BP and Shell would likely exceed their profits this year and therefore would have to be paid out of debt. In this scenario I expect they would look at rebasing their dividends to a lower level. Even so, I wouldn’t expect them to cut to zero.”

At the end of 2019 the oil, gas and energy sector accounted for 17% of dividend distributions in the FTSE All-Share, according to the Link Group UK Dividend Monitor. Says Mogford: “While this may seem daunting we should remember that financials made up nearly one third of dividend payments in 2007 and the overall cut was just 13% and income recovered back to pre-crisis levels within two years. As in 2009 there will be some sectors where dividends are relatively better protected including healthcare, utilities and consumer staples.  However, the lessons about balance sheet strength remain absolutely key irrespective of the sector.

“Newton’s income strategies look for companies with the ability to suffer tough environments. In our analysis of new holdings we spend more time analysing what can go wrong than what can go right.  While our companies will be impacted by this unexpected shock, we hope this sort of analysis will stand us in good stead in the coming months. There’s still great uncertainty over the next 12 months but we expect the long-term investor will be able to look back at 2020 with hindsight as a temporary setback in an otherwise positive environment for equity income investors.”

5MoneyWeek: ‘Are your dividends under threat?’, 5 May 2015. The Merton score is a recognised balance sheet model that estimates the distance to default of a company. The stronger the firm's finances, the higher the score.

The value of investments can fall. Investor

For Professional Clients, only.  This is a financial promotion and is not investment advice.

Any views and opinions are those of the investment manager, unless otherwise noted.

This is not investment research or a research recommendation for regulatory purposes.

BNY Mellon is the corporate brand of The Bank of New York Mellon Corporation and its subsidiaries.